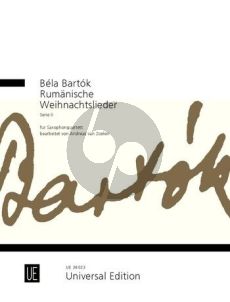 Series II - The second series of Bartók‘s “Romanian Christmas Carols“ arranged for saxophone quartet.
This collection is based on adaptation of folk songs that Bartók collected at the beginning of the 20th century during his journey through Romanian villages.

What distinguishes Béla Bartók from most of his European contemporaries is his lifelong dedication to folk music. He began to look into Hungarian peasant music out of musical interest only, but gradually extended his research to the neighbouring countries' folk music to study relatedness and differences, origins and influences. Bartók started to collect Romanian folk tunes in 1908, in 1915 he adapted them to be played on the piano – his "Romanian Christmas Carols".

This edition of sheet music provides the rewarding opportunity to plan a concert quite different to every other Christmas concert. This arrangement of Bartók's varied composition makes full use of a saxophone quartet's abundant acoustic possibilities. The colourful pieces will enhance the saxophone quartet repertoire.