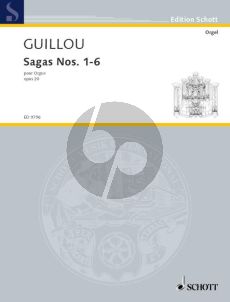 This is the name given to the ancient tales and legends of Scandinavia, mostly drawn up in Iceland. The term itself is of Germanic origin, form the verb 'sagen' which means to say, to recount. The title also has to do with what is said, what is recounted, in a musical epic of today.
Three of these pieces, Sagas 2, 4 and 6, have the particularity of being improvisations.

In Saga 1, the instrument seems to awaken out of a dream of which the two opposing elements gradually become ordered. Pedal staccati soon take control and come to predominate as they build up while, in a spirit of contradiction, various solo steps, Cornet, Cromore, unfold their melismas. The dream then reestablishes itself, this time for good.

The second Saga is a sombre, frenetic dance based on groups of five semiquaves. It dies away, then, after a long silence, a note emerges, and this lone note, on three different solo stops, beaten, hunted by its two neighbouring notes in increasingly animated accents, anacruses and appoggiaturas, disappears, giving way to the sombre dance which then broadens out. It is interrupted all of a sudden by the irritated, exasperated, fuming tone of that harshness that overdoes itself and vanishes. The sombre dance appears one last time, letting itself go into paroxym.

The third Saga unfolds as a very ancient chant, the memory of an Ossianic chant of the earliest times.

The fourth Saga develops the lyricism of a tale to be told. But in midway comes a sort of destructive outburst of which the ever tighter links give way for a moment to pure narrativity, which, after a few upsets, ends the piece with the memory of great danger overcome by candour.

The fifth Saga is a kind of quiet walk, interspersed with a few controversies, interceptions and demonstrations that are rather more lively.

The sixth Saga develops a kind of theme in runs, whose constantly rhythmic rebounding might bring out the idea of apologetic or exalted acclamation.