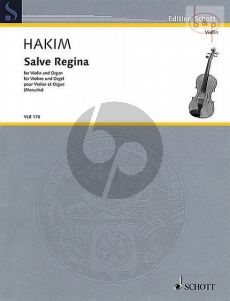 Naji Hakim, born in Beirut in 1955, is counted among the most important of present-day organists and organ composers. He studied organ with Jean Langlais at the Conservatoire National Supérieur de Musique in Paris, was organist at Sacré-C£ur in Paris from 1985-93 and then succeeded Olivier Messiaen as organist at the Église de la Trinité. He gives concerts throughout the world, works as a professor at the Conservatoire de Musique in Boulogne, and holds a visiting professorship at the Royal Academy in London.In his organ works, Naji Hakim often draws his thematic material from the Gregorian chant, thesaurus of the Roman Catholic Church, which is regarded as essential part of the liturgy even by Vatican II. This paraphrase of the antiphon to the virgin, 'Salve Regina', is based on the plainsong theme (solemn tone). The Gregorian line is unchanged; it evolves slowly above an expressive harmony. The text of the prayer is underlined by the meditative, soft and peaceful character. Intermediate level.