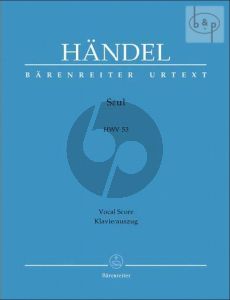 Saul was given its first performance under Handel’s direction at the Haymarket Theatre, London, on 16 January 1739. The original libretto (dated 1738) refers to the work as “an Oratorio or Sacred Drama”. This libretto was written by Charles Jennens (1700–1770), a wealthy amateur writer from Gopsall, Leicestershire. A letter of 28 July 1735 from Handel to Jennens suggests that a complete raft of the text already existed at that time.

Saul occupies an extraordinarily important position in the English oratorio tradition that Handel brought to perfection, standing alongside Israel in Egypt at the end of the first creative period of such works.