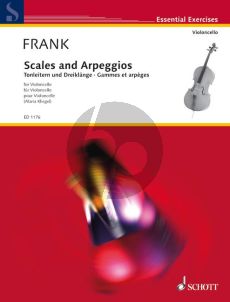 Maurits Frank (1892-1959) from Rotterdam was one of the leading cellists in the early 20th century. He studied with Pablo Casals among others and was a partner of Paul Hindemith in the Rebner and Amar Quartet. Later he worked as a teacher of violoncello and chamber music at the Cologne Academy of Music. His studies deal with four music practice areas for the improvement of the left-hand technique: intonation, dexterity, stretching capacity and muscle build-up. In the preface, the renowned cello teacher Maria Kliegel presents preparatory thoughts on how to sensibly practise scales and triads.