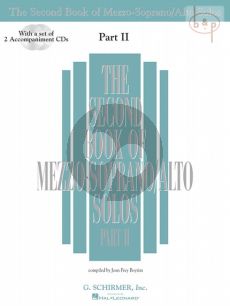 More great classical material for progressing vocal students, from the leading American expert in teaching the young voice. The series started with The First Book of Solos, and then, at the same difficulty level, came The First Book of Solos - Part II. The Second Book of Solos, originally released in 1993, is for singers who have taken voice a little longer and are capable of more challenges, but is still decidedly student-level material, and music that can be sung by good high school students. The new The Second Book of Solos - Part II set is at exactly the same level as The Second Book of Solos. It shares the same features: a deliberate variety of music in different styles and languages, including a few sacred selections, with over 30 songs per book. Available as books only, or in packs with two CDs of piano accompaniments recorded by Laura Ward. 140 pages.