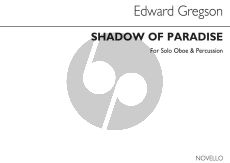 Shadow of Paradise was written specially for Melinda Maxwell. The work was completed in 2005, the same year that she recorded the work together with Richard Benjafield (percussion) for the Dutton label.

"The work is based on the poem by Samuel Taylor Coleridge, Kubla Khan, and I have attempted to capture some of the spirit of his highly evocative text in my music.

It is structured in three main sections: the opening section (And 'mid this tumult Kubla heard from far Ancestral voices prophesying war) is dramatic in nature with the oboe announcing two ideas - the first a high repeated note rhythmic pattern (later with multiphonics), answered by six differently pitched drums and temple blocks, and the second a short lyrical phrase mainly built on thirds.

In the second section (A damsel with a dulcimer In a vision once I sawàCould I revive within me Her symphony and song) the solo oboe transforms the repeated notes and thirds of the first section into a love song, underpinned by the percussionist's vibraphone and crotales.

A short reprise of the very opening leads into the final section (Beware! Beware! His flashing eyes, his floating hair! Weave a circle round him thriceà) which mirrors the text with three short dances in chain form, folk-like in character and increasingly climactic. A final reprise of the opening seems to suggest a violent end, but the oboe's echo of the love song, answered by the percussionist's crotales, brings the work to a gentler conclusion."