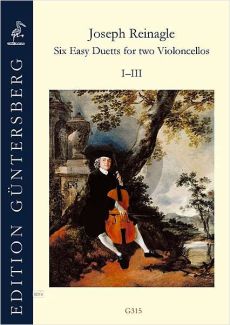 Six Easy Duetts for two Violoncellos in which several favorite Scotch and Welsh Airs are introduced. Joseph Reinagle was Professor of Violoncello in Oxford in the early nineteenth century. His name is known to many violoncello pupils through his simple duets with the original title Twelve Progressive Duets for Two Violoncellos, expressly composed for the use of beginners, which have for a long time belonged to the regular repertoire of many cello teachers and pupils. The six duets in the present edition are not identical with those in the above-mentioned collection. They are more extensive and musically, rhythmically, and technically more demanding, with their special charm lying in the use of Scottish and Welsh melodies. The duets are ordered progressively, with the first part generally making greater demands than the second. The introduction was written by Reinagle expert Margaret Doris, Dublin.