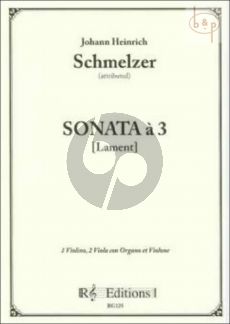 The first printed edition of a wonderfully powerful and expressive Lament (although not so titled) by (most probably) Johann Heinrich Schmelzer. A little (personal) history: many years ago London Baroque made a recording (on black vinyl in those days!) of music by Muffat and Schmelzer. On this disc we included a piece which we had only in a hand-written score by Nikolaus Harnoncourt -- a piece which we all attributed instinctively, and with little further thought, to Schmelzer. And to acknowledge its form and style, but to distinguish this piece from the Lamento sopra la morte Ferdinande III, also on this disc, we christened this Sonata a 3, "the other Lament". At long last I have got hold of copies of the original manuscript parts (in the collection in Kromeriz), and have released what seems to be the first printed edition of this Sonata à 3. It is so astoundingly similar, in both form and content to Schmelzer's Lamento sopra la morte Ferdinande III, that they must be related in some way, although the precise details remain lost in the dust of time! I will stick (for reasons given in my preface) to our original feeling, and attribute the Sonata as a Lament to Schmelzer.