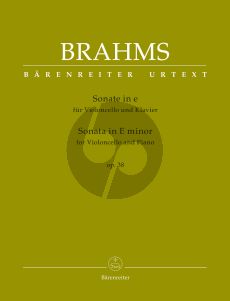 The first three movements of Johannes Brahms’ E minor Cello Sonata were composed in 1862, the last movement was written in 1865. During the first years of its performance the work was received with mixed enthusiasm. By the end of Brahms’ life, however, it was widely performed and by the first decades of the 20th century it was firmly embedded in the repertoire of many distinguished cellists. It was notably Robert Hausmann’s advocacy of the work which seems to have contributed greatly to its promotion.

Truly remarkable is the unique Performance Practice Commentary. Here the editors take the premise that already a few decades after Brahms‘ death a widening gulf developed between the composer’s expectations and the performance practices of the early 20th century. In a very concrete and practical way, the editors summarize some of the key issues in understanding Brahms‘ notation with regard to rhythm and timing, dynamics and accentuation, dots and strokes, slurring and non legato, piano pedalling and overholding, piano arpeggiation and dislocation, string instrument fingering, string instrument harmonics and vibrato. In this way, the edition offers an exciting and often surprising insight in Romantic musical interpretation.