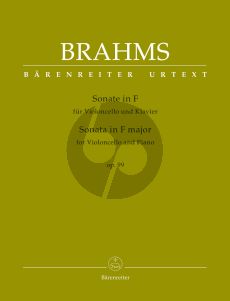 Brahms completed his Cello Sonata op. 99 during the productive summer of 1886. The first public performance took place in Vienna on 24 November of the same year. Robert Hausmann played the cello part and the composer himself was his partner at the piano. Even though the work was generally received positively, it took some years until it was fully appreciated and gained its irrevocable place in the cello repertoire. Of particular value to the editors were the two early performance editions of the Cello Sonata op. 99 by Hugo Becker and Carl Friedberg, as well as by Julius Klengel. Both cellists, Becker and Klengel, had a connection to Brahms who very much admired and trusted Becker's playing and who performed together with Klengel. This edition not only incorporates Becker's and Klengel's performance markings but also Hausmann's for whom the piece was written. As such, the Barenreiter edition comes with a cello part marked with fingering and bowing by the editors which are based on the practices of Brahms' contemporaries. We also provide an unmarked Urtext part. An important part of this edition is the extensive Preface. Firstly it informs about the work's origin, early performances, its publication as well as early reception. Truly remarkable is the unique Performance Practice Commentary. Here the editors take the premise that already a few decades after Brahms' death, a widening gulf developed between the composer's expectations and the performance practices of the early 20th century. In a very concrete and practical way, the editors summarize some of the key issues in understanding Brahms' notation with regard to rhythm and timing, dynamics and accentuation, dots and strokes, slurring and non legato, piano pedalling and overholding, piano arpeggiation and dislocation, string instrument fingering, string instrument harmonics and vibrato. In this way, the edition offers an exciting and often surprising insight into Romantic musical interpretation. - A pioneering Urtext edition - With an unmarked Urtext part - With a second part including fingering and bowing based on the practices of contemporaries of Brahms - With an extensive Performance Practice Commentary - For further information on Romantic performance practice we recommend the text booklet: “Performance Practices in Johannes Brahms' Chamber Music”, BA 9600