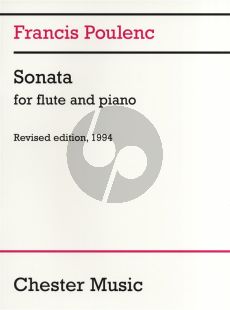 The première of Poulenc's Sonata for Flute and Piano, dedicated to the memory of Elisabeth Sprague Coolidge, was played by Jean-Pierre Rampal accompanied by the composer in 1957 in Strasbourg. Poulenc began working on the piece shortly after completing his large opera Le Dialogue des Carmélites and there is a clear harmonic and melodic relationship between the two. The first movement -in three sections- opens in e minor but closes with a Schubertesque major-minor dilemma. Here the piano part, richly laden with Alberti basses, serves principally as accompaniment. It maintains this status in the second movement., which after a two bar canonic introduction begins with a subtle yet exceedingly rhythmically simple melody that bears a close resemblance to the aria of soeur Constance in Le Dialogue des Carmélites. The third movement abounds in sudden shifts between biting staccato and warm legato passages, characterized by such terms as très mordant and mélancolique. Interwoven is a reference to the first movement - a technique Poulenc also incorporated in the sonatas for clarinet and for oboe. Unlike the first two movements, in the third movement the flute and the piano engage in an incisive dialogue.

This Sonata For Flute and Piano is a virtuosic Flute solo by renowned influential French composer Francis Poulenc. Written in 1956-57, this is an elegant, dreamy chamber work and he has demonstrated his obvious compositional skill, also highlighting the French affinity with the sweet sounds of the Flute. This 1994 New Edition has been carefully edited by Carl Schmidt and is an authoritative edition that contains a detailed history and comprehensive commentary of the editorial process in English, French and German.