Sonata No.1 Op.75 in D-minor for Violin and Piano - Camille Saint Saens 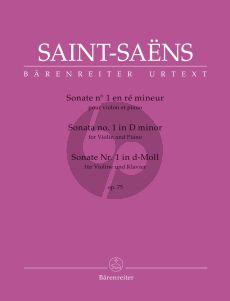 The second half of the 19th century represented something of a ‘Golden Age’ of the violin sonata in France: Influential violin sonatas such as those by Franck, Fauré and Saint-Saëns were among the successful works of this genre, inspiring many further compositions.

Saint-Saëns’ Violin Sonata no. 1 was incorporated into the repertoire of numerous late 19th-century violinists soon after it was written. It was also this sonata which inspired Marcel Proust when he wrote about the fictional sonata by the composer Vinteuil in his novel “À la recherche du temps perdu”.

This performing edition edited by Fabien Guilloux and François de Médicis is based on the musical text from “Saint-Saëns – Œuvres instrumentales complètes”, volume III/4 in which Saint-Saëns’ lengthy corrections of the Durand first edition as well as the autograph sources have been meticulously evaluated.