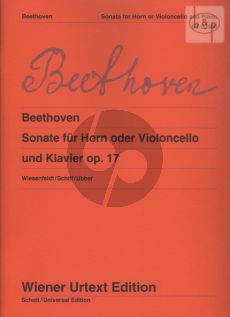 Originally, Beethoven wrote Sonata Op. 17 for horn and piano. This composition was intended for the famous horn virtuoso Johann Wenzel Stich who called himself Giovanni Punto. Punto had greatly expanded the playing techniques on the natural horn. Accordingly, Beethoven tailored the solo part completely to the unique playing skills of this virtuoso musician. Punto performed the work several times; to other hornists, however, it remained unaccessible at that time because of its difficulties. That probably was the reason why this work was published in a version for horn or violoncello one year after the world premiere already. It is deemed to be fairly certain that this arrangement goes back to Beethoven himself. Carl Czerny already ranked this sonata among Beethoven's original cello sonatas and listed it chronologically as No. 3. Like the 1801 edition of the Viennese publisher Tranquillo Mollo, the Wiener Urtext Edition publishes the sonata for horn or violoncello and piano. Whereas the horn sonata was very difficult to play at the time of creation, the arrangement for violoncello, curiously enough, is one of the easiest among Beethoven's cello sonatas. For this reason, the composition is increasingly popular among cellists as an accessible approach to Beethoven's oeuvre for violoncello and piano. Consequently, the work is now available in the Wiener Urtext Edition series as separate edition as well.