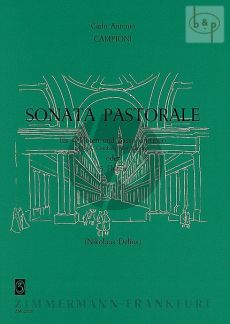 Carlo Antonio Campioni (November 16, 1720 - April 12, 1788), also known as Carlo Antonio Campione or Charles Antoine Campion, was an Italian composer, as well as a collector of early music. Campioni was born in Lunéville in France. Not much is known about his education in music. Anton Raaff believes Campioni studied violin with Giuseppe Tartini in Padua. From 1763 until his death, he was maestro di cappella to the Grand Duke of Florence. He died in Florence. He wrote music in a variety of forms, but was particularly prolific in instrumental music, publishing several sets of trio sonatas. A setting of the Salve regina is his only published work of sacred music, though he did write more sacred works, such as Requiems for Franz I and Maria Theresa, and a Te Deum celebrating the birth of Francis II. The music of Campioni circulated in Europe in many different editions and combinations. To this day, a catalogue of Campioni's music put together by at-the-time Ambassador Thomas Jefferson is useful to musicologists in studying Campioni's oeuvre.