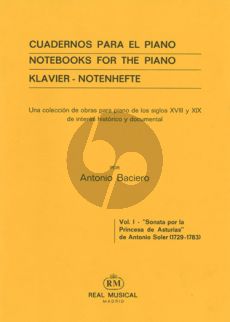 Padre Antonio Soler (1729-1783) was an Catalan polymath and composer, who composed over 100 Keyboard Sonatas. Debate rages as to whether he studied under Scarlatti, but he was definitely influenced by the latter’s music, and contributed much to the development of European Organ, Piano, and Harpsichord music. Sonata por la Princesa de Asturias was one of his many works that had been lost, but was found in a private collection and published in 1979 by the Spanish pianist and musicologist Antonio Baciero.