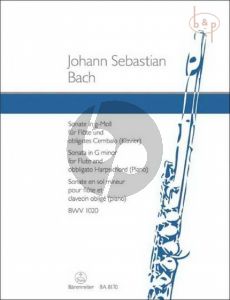 The flute sonata in G minor BWV 1020, one of the gems of 18th century flute literature, has been passed down to us over the years as a work of Johann Sebastian Bach but its authenticity is disputed.

Recent research suggests that the composition most probably came from the pen of Bach's oldest son Carl Philipp Emanuel.

This new edition is an extract from the Bärenreiter edition BA 5220, which also includes the two flute sonatas BWV 1033 in C major and BWV 1031 in E-flat major which are of similarly doubtful authenticity.

The sonata in G minor has been edited by the renowned Bach scholar Alfred Dürr using the editorial guidelines of the New Bach Edition as a basis and it appears now for the first time as a separate performing edition.