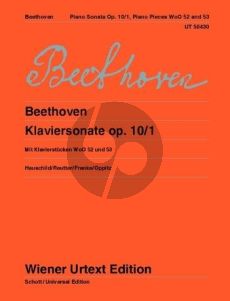 Beethoven’s Sonata Op. 10 No.1 was written between 1795 and 1798. During this time Beethoven originally considered two piano pieces in C minor (WoO 52 and 53) as potential third movements before the finale, but finally decided on a three movement work. For the first time, this edition also contains the two abandoned pieces in the appendix. This publication is not intended to be played as a sonata with 4 or even 5 movements. It could however, be considered as a suggestion for the conceptual design of a piano recital that features the original three movement version of the Sonata as well as the two piano pieces.