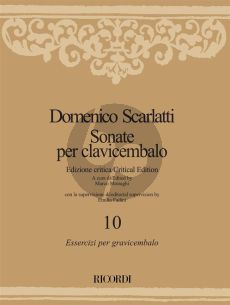 The 10th volume of Domenico Scarlatti’s Sonate per clavicembalo represents a crucial landmark of this series, i.e. the thirty Essercizi per gravicembalo (London, 1738-39) at the heart of the composer’s production. For a long time, the style of these sonatas and their role in the history of keyboard music has been debated. But nobody had ever examined thoroughly the key aspects of textual criticism, intended not only as a detailed reconstruction of the text, but as a philological study with a full scope.
This volume is the first step in such direction. The musical text of this edition is the result of a systematic comparison of all the eighteenth century printed and manuscript sources preserving Scarlatti’s treasured Essercizi. In some cases, the edition presents an alternative version of the same sonata, based on the sources’ examination and sometimes showing an intricate web of authorial variants.
The detailed Critical Notes take into account all the variants handed down by the sources. Many topics are discussed in the rich Introduction, first and foremost the historical context and the genesis of Scarlatti’s sonatas. Furthermore, other important topics are investigated, such as: the relationship between the Essercizi and the rival Londonese edition by Roseingrave: the role and chronology of the contemporary French editions, known under the name of Boivin: the early interventions of anonymous performers.