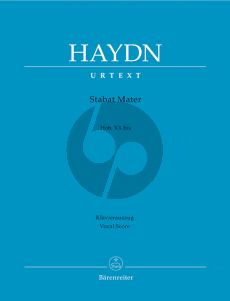 The new scholarly critical edition of Joseph Haydn's Stabat Mater (1767) is published in Henle's complete edition of Haydn's works. This edition is the first to come as close as possible to the lost original and has been compiled using all currently available sources. The score has been fully amended. In its original orchestration for two oboes or English horn, strings and organ.

At a later performance of this work, probably in 1803, Haydn attempted to accommodate the intervening changes in musical taste. According to the composer's request and under his supervision, Sigismund Neukomm enlarged the wind orchestration by adding a flute, two clarinets, two bassoons, two French horns, trumpets and timpani. Haydn’s Stabat Mater in both its original scoring as well as Neukomm's scoring.