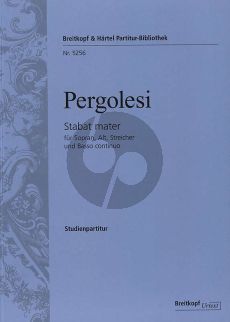 In Naples, late in the year 1734, Giovanni Battista Pergolesi obtained a commission from a brotherhood of noblemen to write a new setting of the “Stabat mater” text in order to replace the work of Alessandro Scarlatti, who had passed away in 1725. This work, too, was to be limited to two vocal parts, which reflects the intimate character of this devotional work. Just a few years after its creation, Pergolesi’s “Stabat mater” setting became known throughout the entire musical world, regardless of all religious boundaries. No other musical work was printed and copied more often in the 18th century than the “Stabat mater.”

It would be difficult to name an other work in music history which has enjoyed such a steady success and importance as Pergolesi's "Stabat mater". This is reason enough to replace the established, often performed and yet in several respects no longer satisfactory standard edition by a revised new edition, prepared by the reputable musicologist Helmut Hucke. The complete performance material (score, orchestral Parts, piano reduction, Choral score) has been newly engraved especially fort his revised edition.