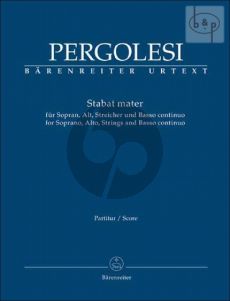 The 'Stabat mater', composed shortly before Pergolesi's untimely death at the early age of 26, quickly attracted attention. The work's importance was soon so great that none other than Johann Sebastian Bach performed a German version of the work based on the 51st Psalm. Numerous copies, prints and arrangements attest to the work's vast popularity, a popularity that still exists today. For the present edition, the autograph was for the first time compared to a very early Neapolitan score that is presumably based on the parts from the work's premiere. The findings have influenced the musical text; the details are described in the critical commentary.