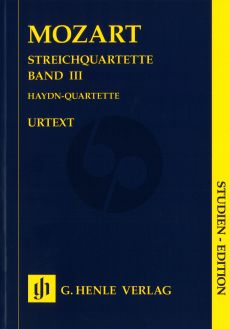 Each of these four-movement works is a real jewel. Mozart worked hard on these six string quartets, and dedicated them to none other than the “inventor” of the genre himself: Joseph Haydn. They were first published in 1785, and have since then been reprinted innumerable times. Wolf-Dieter Seiffert, the editor of this new Henle Urtext edition, already penned the Critical Report for these Haydn Quartets in the New Mozart Edition, 25 years ago. He is now presenting this core repertoire in an edition of its own. This Urtext edition clarifies numerous inaccuracies in other editions, especially with regard to dynamics and articulation, and even corrects a few wrong notes that had gone unnoticed up to now. Special attention has here been paid to making the music as easy-to-read as possible, with ideally placed page turns.