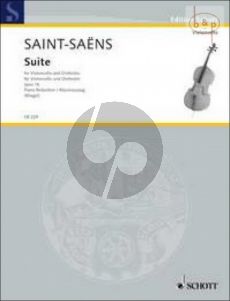 When writing his Concerto No. 1 in A minor, Op. 33, Camille Saint-Saëns created a 'classic' of violoncello literature. But the French musician even wrote other solo works for this instrument: a second concerto, two sonatas, the 'Swan' from 'The Carnival of the Animals' as well as a 'Suite with Piano Accompaniment' Op. 16. Premiered on 27 April 1866 and probably written shortly before, the work is based on the composer's study of tradition, especially of the form of the Baroque suite, integrated in a Romantic tonal language. Many years later (1919) the composer also presented a version with orchestral instead of piano accompaniment, and for this version he replaced movements 3 and 5 and changed the ending of the fourth movement. The present edition contains the text of the orchestral version: The five-movement suite begins with a prélude reminiscent of Bach which is followed by a pleasant serenade, a stylized gavotte and a sentimental romance before a passionate tarantella puts a virtuoso end to the piece. The enthusiastic, melodic 'Suite' is a valuable addition to the cello repertoire, suitable for both tuition and concert purposes. Orchestral version. More advanced level.