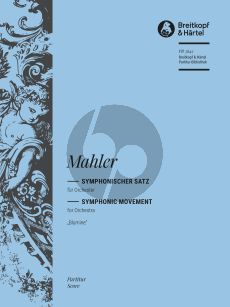 The “Blumine” movement included in the original five-movement version of Mahler’s Symphony No. 1 was long considered lost. Composed as early as 1884 for a theater piece, Mahler inserted it into the symphony as its second movement in 1888.

After three performances, he turned his back on this “Love Episode,” calling the “sentimental, gushing movement” a “youthful folly,” and removed it. Mahler’s Hamburg autograph score was only rediscovered in 1966. Benjamin Britten gave the “Blumine” movement a new hearing at the 1967 Aldeburgh Festival.

The critical new edition is based for the first time on the autograph score, together with the meanwhile rediscovered score copy with Mahler’s last revisions.