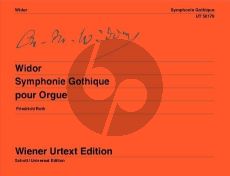 The Symphony Gothique op. 70 by Charles-Marie Widor is among the most important compositions for organ created at the turn of 19th to 20th century. The new Wiener Urtext Edition now published is based on the first edition - there are no existing hand-written sources - and on its reprints as long as they were published during Widor's lifetime. In addition to the printed sources, Widor's own recordings dating back to 1932 were also taken into account. Their modified ending is included as an alternative. Daniel Roth's detailed notes on interpretation are an important source for the understanding of the way Widor's works for organ should be played as well as an introduction into the sympathetic world of sound the organs by Cavaillé-Coll provide.