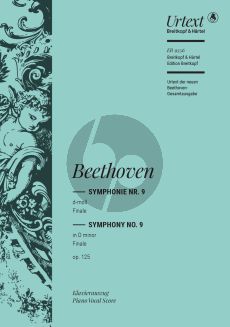 Since 2001 the “Ninth” has been included in UNESCO’s Memory of the World Register. Beethoven was preoccupied with his unique work for many years, since at least 1815, and still shortly before his death, according to the highly complex source situation. The work will now finally be available as an edition produced from the new Beethoven Complete Edition in time for the 2020 anniversary year commemorating the composer’s 250th birthday.

Not all doubtful cases can be clarified, not all gaps closed, but numerous aspects have been further illuminated in this edition. New findings and source evaluations taken into account here, appear, for instance, pertaining to the work’s title, the tradition of the metronome indications, the contrabassoon part, and the underlying vocal text in the finale, as well as in the original rendering of the sforzato and forte markings.