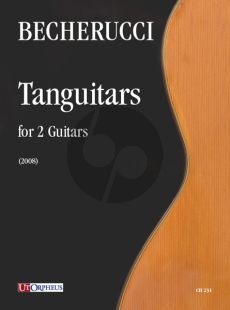 Of Spanish-Italian origin, Eugenio Becherucci studied guitar and composition, graduating brilliantly at the Conservatory of Frosinone (Italy) and continued his training in Spain with José Tomás at the Conservatorio Superior de Musica of Alicante and in France with Betho Davezac at the Ecole Nationale de Musique et Danse in Meudon. He performs at major venues in Italy and abroad as a soloist and in various chamber music ensembles. He is very active in the field of new music, but also explores the techniques and literature of ancient instruments and related devotes particular attention to the Afro-American repertoire. In recent years the role of composer joins more and more that of a performer, his compositions have been performed in major theaters of Europe, and are regularly broadcast by European and American radio. He is artistic director of the International Guitar Festival of Castrocielo. He has recorded for RAI, for several foreign broadcasters and for the record labels Sinfonica, Edi Pan, Adda Records, Fundaciòn ACA , Logos Records. He regularly holds courses and masterclasses in Italy, Spain, Portugal, Switzerland and holds the chair for thirty years in the Italian conservatories.