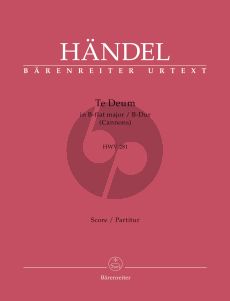 Handel composed the “Te Deum” in B-flat major HWV 281 in 1718 for the future Duke of Chandos, hence its nickname “Chandos Te Deum”. Here it is called “Te Deum for Cannons” after the Duke’s stately home named Cannons where the first performance took place. The unusual scoring for flute, oboe, bassoon, trumpet, two violins and basso continuo plus a choir (one soprano, three tenors and a bass) probably reflects the musicians which were available at Cannons, bearing in mind that three tenors were used also in “Acis and Galatea”, the masque which was composed at almost the same time. Though in many respects this “Te Deum” is reminiscent of the “Utrecht Te Deum”, its smaller forces tend to give it more the character of chamber music. This edition is based on the Urtext from the “Halle Handel Edition” (BA 10708), which offers the first complete scholarly text of the music for the “Te Deum”.