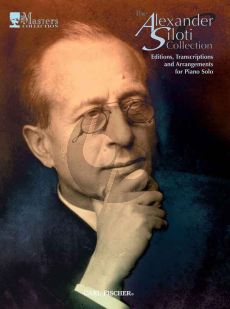 One of the least known of the great Russian pianists of the late 19th and early 20th Centuries, Alexander Siloti (1863-1945) was one of the most influential and progressive. As a concert promoter, he introduced the music of dozens of composers to the Russian public in the famous Siloti Concerts of 1903-1917, including Albeniz, Debussy, de Falla, Delius, Elgar, Enesco, Mahler and Schoenberg.

A student of Liszt (and one of the teachers of Rachmaninoff), Siloti is a central figure in the development of the great age of the piano virtuoso. As with many of his colleagues, transcribing and arranging existing music for the piano was a major part of Siloti’s activity, and since he made no recordings, his published transcriptions are one of the few existing keys we have to his musical taste and philosophy.

In an extended biographical essay, Dr. Charles Barber explores this issue and writes cogently about the style and influence of this remarkable man. The Alexander Siloti Collection is dominated by Siloti’s remarkable transcriptions and arrangements of the music of J.S. Bach, notable particularly for their pianistic character and faithfulness to the unique “genetic code of Bach’s design.” Some of the Bach works included are: Prelude in B Minor, BWV855a, Gigue from Suite in Bb Major, Chaconne in D Minor, the Organ Preludes in E Minor and G Minor and the celebrated Toccata and Fugue in D Minor, BWV 565. Music by Gluck, Mozart and Chopin is also contained in this generous compilation of pianistic wizardry.

This addition to The Master’s Collection is likely to be one of the most talked about piano folios of the year. (288 pages, smythe sewn binding). 288 pages.