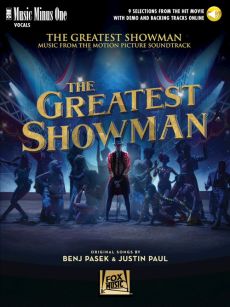 Starring Hugh Jackman as P.T. Barnum, this musical drama film released in December 2017 has been a box office success, and its soundtrack composed by Benj Pasek and Justin Paul is a big part of that. “This Is Me” from the film won the 2018 Golden Globe Award for Best Original Song, and was also nominated for an Academy Award in that same category. This Music Minus One vocal folio includes professionally-produced sound-alike audio tracks for demo and performance online for 9 selections. 98 pages.