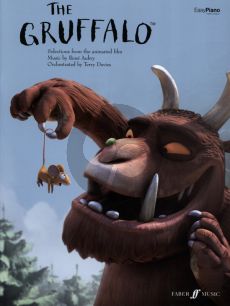 Julia Donaldson's story of The Gruffalo needs no introduction, suffice to say it was first published in 1999 and has since sold over 10 million copies worldwide. Donaldson's story, which appears in rhyming couplets, is complemented by the wonderful illustrations of Axel Scheffler and tells the story of a mouse who takes a walk through a deep, dark wood, encountering several dangerous animals on the way.

An animated film from the BBC was first shown on Christmas Day 2009, and has since been released on DVD. This easy piano book has a number of selected themes from that production.