The Library Of Classical Music for Piano - Album 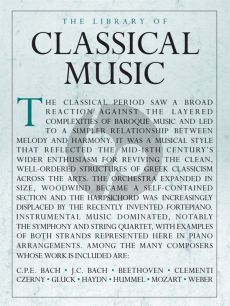 The Library Of Classical Music is a wonderfully vast collection of the greatest pieces of music from the Classical period. Featuring a diverse range of compositions from the innovators and masters, each work is arranged for solo Piano in a conveniently spiral-bound volume. Among the many composers whose work is included are C.P.E. Bach, J.C. Bach, Beethoven, Clementi, Czerny, Gluck, Haydn, Hummel, Mozart and Weber. The sheer amount of incredible music featured within The Library Of Classical Music makes this an essential book to have on your bookshelf or music stand. The joy of playing this music will be in learning your favourite pieces or discovering new ones by unfamiliar names. The Classical period saw a broad reaction against the layered complexities of Baroque music and led to a simpler relationship between melody and harmony. It reflected the mid-18th century’s wider enthusiasm for reviving the clean, well-ordered structures of Greek classicism across the arts. The orchestra expanded in size, woodwind became a self-contained section and the Harpsichord was increasingly displaced by the recently invented fortepiano. Instrumental music dominated, notably symphony and string quartet, with examples of both strands represented here in beautiful and accurate Piano arrangements that are perfect for seasoned players of Classical music, or those new to the period. The Library Of Classical Music sheet music songbook covers the rich musical period that followed Baroque and preceded Romantic. The Classical era saw some of Europe’s greatest composers exploring new musical possibilities, spanning some 70 years starting in the mid-18th century. The spirit of Classicism would last until the new preoccupations of Romanticism defined the next major period of Western music. All of this makes The Library Of Classical Music a brilliant collection of Piano sheet music that works as well as an introduction to the period as it does as a comprehensive anthology of the greatest works of that era. 352 pages.