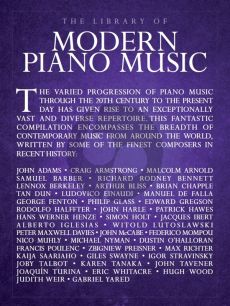 Some of the most beautiful and diverse pieces by some of the finest composers in recent history are included in this enormous Library Of Modern Piano Music. Such a comprehensive collection of brilliant works for solo Piano belies the rich quality and sheer amount of music being composed that just begs to be learned. Over 100 fantastic pieces are guaranteed to keep you learning from this truly classic selection until the next century!

The Library Of Modern Piano Music boasts an unprecedented volume and variety of amazing compositions, some well-known, some more unfamiliar, some composed as standalone pieces and others as film scores, but the one thing uniting them all is their impeccable musicality and how enjoyable they are to play.

Featuring the biggest names in contemporary classical music, composers like Einaudi lend their wonderful compositions (Primavera, Una Mattina), and all-round geniuses like Philip Glass are represented with a generous selection of their finest work (Metamorphosis Five, Opening Piece From Glassworks and more).

The varied progression of Piano music through the 20th century to the present day has given rise to an exceptionally vast and diverse repertoire. The unbelievable depth of the composers included here means you'll rarely be stuck for something to play. Kaija Saariaho, Stravinsky, Francis Poulenc, Dustin O'Halloran, Nico Muhly and Witold Lutoslawski are genuinely just a fraction of the composers featured in The Library Of Modern Piano Music.

Some great standalone compositions like Samuel Barber's incomparable Adagio For Strings sit aside excerpts from longer works like a portion of Edward Gregson's An Album For My Friends or Joby Talbot's Once Around The Sun. If you happen to be a fan of film and television scores, a taste of Michael Nyman's distinguished score for The Piano is included, a section from Crouching Tiger, Hidden Dragon, as well as parts of Richard Rodney Bennett's score for the now rarely-seen but superb 1980s miniseries of Tender Is The Night.

Many established composers are included in this collection who are widely-recognised as masters. However, The Library Of Modern Piano Music also includes many young virtuosos who have not yet achieved that status but are certainly well on their way. These original compositions span standalone pieces, albums, suites and arrangements from diverse talents, making The Library Of Modern Piano Music a collection that is certain to be seen by future generations as a perfect collection of the best of contemporary classical music. 352 pages. Intermediate to advanced level.