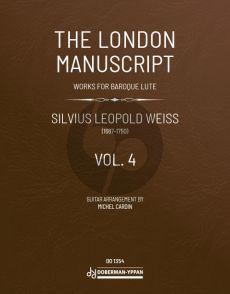 Here is the presentation of one of the most important volumes of music of all times for solo instrument. In what has come to be known as the “London Manuscript”, located in the British Library, we find 317 pages of tablature for Baroque Lute containing 237 pieces by Silvius Leopold Weiss (1687-1750). These works are grouped into 26 full solo sonatas with additional material interspersed in the form of 3 preludes, 2 fugues, 1 prelude and fugue, 2 fantasias, 2 tombeaux, a caprice, an overture, a plainte, assorted minuets, gavottes, etc., in addition to five grand duos including the three concertos for lute and transverse flute of four movements each (the flute part is missing) and the two mystery sonatas with neither soprano voice nor title information (believed with a high degree of certainty to be duets). The nomenclature “London Manuscript” is used to distinguish this collection from various other Weiss folios that are housed in Dresden, Salzburg, Vienna, Moscow, Paris, etc. It should be noted that the London Manuscript, despite its extraordinary significance, is representative of less than one half of the total output of this remarkably prolific composer.

The works in the London Manuscript, although having full pagination and partial (although important) piece numbering, do not seem however at first glance to conform to any obvious formal ordering, either chronological, keywise or stylistic, but one can observe with a certain degree of fascination that even these aspects have been taken in consideration. The document should be seen as a body of works that grew over the years, becoming a precious collector’s item for the definitive owner, Count Johann Christian Anthony (Anthoni) von Adlersfeld of Prague.

Composed between 1706 and 1730, this massive musical oeuvre was never published during his lifetime. In fact Weiss pre-dated Paganini with his penchant for maintaining exclusive proprietorship, for him and very few friends, of his virtuoso works. Silvius Leopold must have had a high degree of confidence in allowing such an exception, knowing likewise that Adlersfeld was not a lutenist but rather a collector wishing to keep his exclusive treasure forever. From a collector to another, the volume was undoubtedly passed from hand to hand, before being acquired for two pounds Sterling by the British Museum in 1877. In this manuscript, D. A. Smith has accurately identified six different sorts of handwriting, including that of the master (Weiss) himself. From this we can ascertain that the work was extensively revised, most notably in those pieces that were edited by the five other copyists. We now know that the pagination and the piece numbering are contemporaneous with the edition of the works. All this supports a central thesis that the manuscript was meticulously revised by an author who viewed the individual pieces as part of a unified whole, but was not intended to publication. This would explain the contradiction between the musical perfection and the disregard for titles, minute chronology (specific dates are provided for only a few pieces and sonatas) and precise separations between the works. This strong dichotomy should help us, in the end, and contrarily to our first beliefs, to seriously consider the London Manuscript as generally being musically the most reliable document in a comparative study of sources.

Until recently, the origin of the coat of arms painted on the binding of the London Manuscript has remained a mystery. Thanks to research by Claire Madl, we can now ascertain that they belong to Johann Christian Anthoni von Adlersfeld, an eccentric merchant, music lover and collector from Prague, mentioned by Stölzel in Mattheson’s Grundlagen einer Ehrenpforte, published in 1740. This document also contains references to the Prague Academy of Music and its spiritual leader, the Baron of Hartig, brother of the one whom Weiss dedicated a Tombeau after his untimely death in a riding accident in his 33rd year.

Careful examination of the original manuscript, which has been astonishingly well preserved within the British Library, reveals certain details that the most sophisticated photocopiers cannot reproduce.  The colour of the ink, for example, is of a uniformly dark tint (probably caused by the aging process) with the exception of a few paler corrected notes.  Some of these corrections were typically made by scraping with a knife, occasionally leaving small holes in the paper. Each folio, on the other hand (apart from the last 25 pages), is made of very thick paper - an indication that the highest quality of paper was sought for this compilation. Tim Crawford, who took over from Douglas Alton Smith the task of continuing the edition of the complete works of Weiss, has furnished many explanations of the genesis of the London Manuscript in his research. It seems increasingly plausible that this volume was compiled in Prague in three distinct phases with the collaboration of Weiss in 1717, 1719 and 1723. During the third of these sessions, Weiss not only made minor corrections but seems to have provided missing pages that were lost by the owner of the manuscript. This would explain why certain calligraphic changes correspond systematically to various folio changes.

Ultimately, the SC (Smith-Crawford) works are now referred to by their WSW (Weiss Sämtliche Werke) numberings, as recently established by Peter Steur.

The first volumes contain all the solo Sonatas (Suites), then the isolated pieces, to finish with the duets with flute.