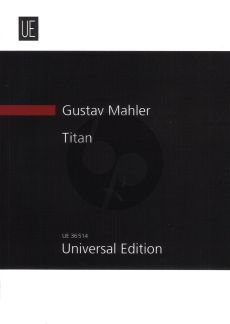 Titan, the early five-movement version of the Symphony No. 1, has never been published before. Universal Edition is proud to make this score available for the first time in connection with the Complete New Critical Edition. Mahler composed the work at the beginning of 1888 in Leipzig. In 1889 it was subsequently premiered as a “symphonic poem” in Budapest.

This edition of the New Study Score Series contains a detailed preface and sources in German, English and French.

At this point, we would like to refer to a statement by the International Gustav Mahler Society (IGMG), which is very concerned about Mahler editions that are not up to date with musicological research and thus cannot do justice to the composer's intentions.