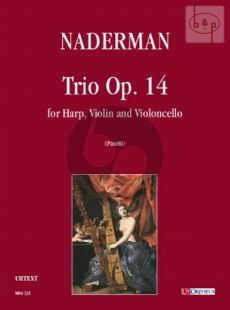 François-Joseph Naderman - son of the harp maker Jean-Henri (1735-1799) - was born in Paris around 1773. Since his birth he was destined to the harp: he took his first lessons from J.-B. Krumpholtz (c. 1745-1790), a familiar friend, and meanwhile he studied also composition and counterpoint. He soon became an excellent harpist, but in a rather old-fashioned way, as one can see in his compositions. His success was brilliant, until the début of the young R. N Ch. Bochsa (1789-1856), who imposed himself on the Paris audience thanks to his bright musical taste and to his innovative harp technique. Past the Revolution and the Napoleonic period (when he travelled and performed throughout Germany and Austria), with the Restoration Naderman was appointed harpist of the Royal Chapel and of the Chamber of king Louis 18th. In January 1825 he also obtained the post of professor of harp at Paris Conservatory, which he held until his death, on April, 3rd, 1835.

After his father's death, Naderman engaged himself with his brother Henri (c. 1780-after 1835), to continue the family job of single action harp making. François-Joseph then used all of his influence as a harp virtuoso and eventually as the Conservatory harp teacher, in order to maintain in fashion the single action pedal harp, in spite of Erard's double action harps' increasing success. The Naderman brothers got involved in a harsh controversy, started by Henri on the occasion of the publication of an article in praise of Erard's harp written by Mr. De Prony, who also suggested to adopt the double action pedal harp at the Conservatory. Henri Naderman wrote a pamphlet entitled Observation de MM. Naderman frères sur la harpe à double mouvement, ou Réponse à la note de M. de Prony, membre de l'Academie des sciences. In reply to these observations, François-Joseph Fétis wrote an article in the Revue musicale, explaining the origin and the development of the harp and ending with a praise of Erard's harps.

In 1828 Henri Naderman published another pamphlet, entitled Réfutation de ce qui a été dit en faveur des différens mécanismes de la harpe à double mouvement, ou Lettre à M. Fétis, professeur de composition [à] en réponse à son article intitulé: Sur la harpe à double mouvement de M. Sébastien Érard, et par occasion sur l'origine et les progrès de cet instrument. Again Fétis replied from the pages of the Revue musicale, with a Lettre à M. Henri Naderman au sujet de sa réfutation d'un article de la Revue musicale sur la harpe à double mouvement de M. Sébastien Érard. This querelle was ended in that same year, with one last exchange of writings: Henri published a Supplément à la réfutation de ce qui a été dit en faveur de la harpe à double mouvement, and Fétis answered with his article 'Mon dernier mot'. François-Joseph never took part directly in this controversy but, from his position at Paris Conservatory, which allowed him to impose his instruments on his students, he expressed his point of view in the preface to the first book of his harp method: The double action harp was presented as capable of lending itself to all possible modulations and to a perfect, nearly absolute, intonation. I here affirm that the purpose had not been achieved, neither for one point, nor for the other. 1st because this harp can not lend itself to all modulations without making use of the synonyms, just as one does on the ordinary harp. Thus the double action is not effective and the complication of the pedals only serve to embarrass the performance, since it becomes impossible to follow all the keys of the modulations. 2nd as regards the tuning of the instrument, the double action mechanism does not allow one to put the sounds of the octaves in mutual relation in the same way as in the single action mechanism. As regards the absolute intonation, it can not be obtained on any instrument, nobody ignores that this exactness is an impossible problem to solve in practice; the highest degree of approximation is the best that one can hope to achieve. I assure that the single action harp is infinitely preferable in comparison to the double action harp: therefore one can not consider an improvement such changes, that have no real utility and in fact bear serious drawbacks.

Moreover: After the harp had been enhanced by means of a first mechanism, it was extended by means of a second mechanism, also moveable, not by doubling the number of pedals, but by a comparable idea, that of VII giving each pedal a double click. Now, in this the innovators deceived themselves. They didn't realize that by decreasing the intellectual aspect of the harp in favor of the coarse, mechanical aspect, they had changed the character of such a lovely instrument, exiling it from its dominions and destroying its charm. It is no longer, in the hands of an artist, the loving interpreter of his sentiments; it is a machine that must be operated with effort. No longer the speech of the fingers, but the labor of the toiling feet.

No longer the surging of an agitated soul expressing through sound the emotions that move it; it is the torment of an artisan that fights painfully against unworkable material. They wanted their new instrument to emulate the piano; a vain pretence, to be rejected upon the simplest examination. How does one compare the strings of the piano, always free, to the strings of the harp, always dependent upon the pedals? And, in the case of semitones, how does one compare the easy gliding of the fingers over the piano to the slow pressing of the feet on the pedals of the harp? Working the pedals is already an obstacle on the single action harp, as I have said; but at least with this harp the artist doesn't have to modify the pressure to avoid a dissonance. If the pressure is too strong, the pedal will stop itself anyway, and can be left on its own and the music will not be disturbed by a dissonance. On the double action harp, however, if the artist calculates his movements poorly, he overshoots the movement of the pedals: it is as if under his feet lurks an abyss into which he may be cast. The sensation he feels brings him insecurity, he doesn't dare abandon himself to the enthusiasm that would carry him away, and the secret fear that grips him stifles his passion and smothers the ardor of his expression. I appeal to experience. [à] As a harp teacher, I am in a position to judge the talent of those who have taken up the double action harp; and how often must I conclude that such success is not worth the labor and pain that they have invested in it! Am I questioning their intelligence or their talent? No. On the single action harp their talent would shine in all its splendor, but they remain attached to a rebellious instrument that has betrayed them.

In spite of his short sight (surely determined by his commercial convenience), François-Joseph Naderman shall be considered one of the greatest harpists and teachers of his epoch. Among his students were Théodore Labarre (1805-1870), the Godefroid brothers, Jules (1811-1840) and Félix (1818-1897), Antoine Prumier (1794-1868) and Robert Nicolas Charles Bochsa. The present edition is based upon the French one published chez Naderman towards the end of the 18th century (plate n. 193), made of three separate parts (harp, violin and cello). The title page reads as follows: TRIO / Pour Harpe, / Violon et Violoncelle; / COMPOSÉ ET DEDIÉ / A / Madame A. DUCHATEL / PAR / F. J. NADERMAN / OEuvre 14. The music text strictly follows the original one. Use of alteration signs has been updated. Please see list of corrections above. ANNA PASETTI