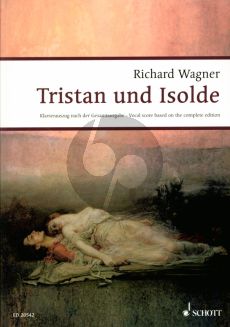 Performance directions by the singer Ludwig Schnorr von Carolsfeld are incorporated in the vocal score from the Complete Edition's Tristan und Isolde volume. He entered these directions into his own copy of the Tristan part which he used at the 1865 Munich premiere.

Richard Wagner was deeply impressed by his interpretation of the title role. For the first time in a vocal score of Tristan und Isolde all cuts are incorporated, with the corresponding transitional bars, which Wagner himself made, and approved, in two cases, were actually declared by him to be final. These cuts strikingly document Wagner's struggle with the final form of the work. For the first time in a single edition all of Wagner's own suggestions for ossias are found; ossias which evolved from performances under his own direction.

Egon Voss writes about this in his foreword to the vocal score: 'Such 'pointers', as you might say, were current practice in the 19th century which Wagner, as the example shows, did not evade. He was enough of a practical man of the theatre to know that a badly sung top note is worse than doing without it. Wagner even tolerated the transposition of lengthier passages because he was less concerned with the letter of the score than with theatrical effectiveness. [...]

The present vocal score goes beyond the Complete Edition [...] in that the ossias mentioned above are indicated in the vocal part itself, in small notes. They concern principally the role of Tristan, but also those of Isolde, Brangäne and Kurwenal. They rest in part on the Tristan edition within the Complete Edition but for the greater part go back to a source which could not be consulted for the Complete Edition because it was not yet accessible.

This relates to a vocal score from the estate of the composer Peter Cornelius who was engaged by Wagner as repetiteur at the Vienna rehearsals in 1861-63. That the ossia bars go back to Wagner can be taken as certain, since in some places they are notated in his own hand.' (Egon Voss, quoted from the foreword to the vocal score)

The transpositions mentioned by Egon Voss, two by Hans von Bülow for the revival of the work which he conducted in Munich in 1869 and the third suggested by Wagner himself in 1861, are printed in the appendix to the vocal score. The ossias, transpositions, and cuts are available for practical use in the theatre and in rehearsal. The cuts are also incorporated into the orchestral materials for Tristan und Isolde. This is also the case with ossias which affect the orchestral parts.