Music from the Motion Picture Soundtrack 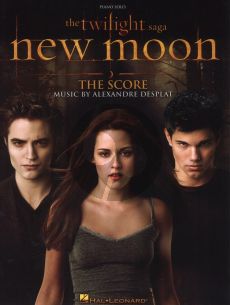 Piano solo selections from the haunting score by Oscar-nominated composer Alexandre Desplat. Desplat is highly regarded and the winner of numerous awards including 2008's "Film Score of the Year" & "Best Original Score for a Drama Film" by the International Film Critics Association for The Curious Case of Benjamin Button, winner of the 2007 Golden Globe for "Best Original Score" for The Painted Veil, and two-time Academy Award Nominee (The Queen & The Curious Case of Benjamin Button). With even more anticipation, a growing fan base, and an award-winning/critically-acclaimed composer, Twilight: New Moon Score is a must-have companion to the movie experience.