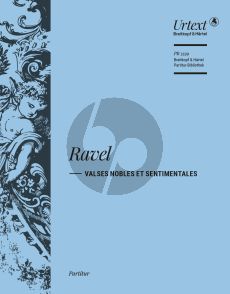 “À l’exemple de Schubert” – Ravel re-invents the waltz, inspired by Liszt, Chopin, Schumann and Chabrier, transforming the rhapsodic gyrations of the dance and sending it whirling into the 20th century. Ravel needed only two weeks of intensive concentration to orchestrate his piano suite “Valses nobles et sentimentales”, which was given its premiere performance in March 1911. Consisting of seven waltzes and one epilogue, the work stamped Ravel as a creative personality whose masterpiece breathed an “unbelievably new kind of musicality and incredibly intensive poetry.” Let us not forget that this was twelve years before “La Valse,” with which it shares a number of similarities. The new edition of the complete performance material in Breitkopf’s Urtext series was prepared by the Ravel expert Jean-François Monnard, thus continuing his series of orchestral works by the French composer.