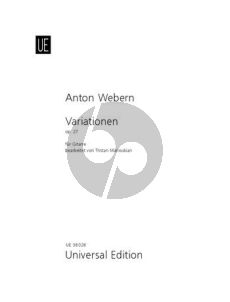 Anton Webern's late instrumental works have always been admired as examples of a systematic, innovative application of twelve-tone technique. From our perspective today, however, the reliance on older models of form and movement-structure, though of course never intended by Webern as a form of "restoration," seems equally important. How closely these aspects are interrelated can be seen from the example of the Variations for Piano, Op. 27, which were written in 1935/36.
On the one hand, Webern has in this work to a certain extent carried Schoenberg's technique of "composition with twelve tones related only to one another" to its logical end in that he derived all of the musical themes "directly" (...) from the abstract sequence of intervals of a basic tone row; for good reason it has been said that the process of variation has itself been made the subject of the composition. On the other hand, in his conception of the work Webern is clearly building on the historical form of the variation. lndeed, it is clear from the sketches and several remarks in his letters that Webern not only understood the third movement (which was composed first) as a series of variations, but also intended to extend this concept of form to the first and second movements composed later. (Ingrid Karlen)

This remarkable work is now available in an arrangement for guitar by Tristan Manoukian.