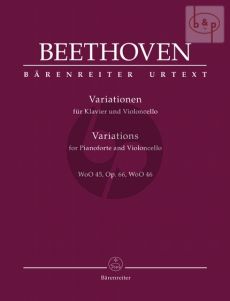 Beethoven's three sets of cello variations comprise the Twelve Variations on a Theme from Händel's Oratorio Judas Maccabeus (WoO 45), the Twelve Variations on the theme Ein Mädchen oder Weibchen (op.66) from Mozart's opera Die Zauberflöte and the Seven Variations on the duet Bei Männern, welche Liebe fühlen (WoO 46), also from Die Zauberflöte. These works have existed in many different editions, some of which have from time to time been (tacitly) reprinted with corrections to keep up to date with the latest scholarship. This new Bärenreiter Urtext edition, however, is the first to give all Beethoven's rhythms in the violoncello part correctly. Beethoven's autograph manuscript of op.66 is lost; the critical commentary (English) includes a complete facsimile of the violoncello part from the only surviving source (the first edition), illustrating the various problems encountered in determining the best musical text. With numerous corrections in the violoncello part Included in the critical commentary is a complete facsimile of the violoncello part of op. 66, as it appeared in the first edition.