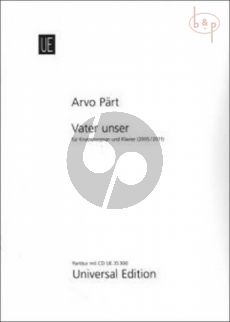 On 4 July 2011 Arvo Pärt performed his Vater unser (Our Father) for Pope Benedict XVI at a ceremony in the Vatican celebrating the 60th anniversary of his ordination to the priesthood. Pärt also presented the Pope with a copy of the manuscript, which is dedicated to him.To honour the anniversary, over 60 artists from around the world have been invited to contribute to a new exhibition of artworks. Amongst the artists are the composers Arvo Pärt, Ennio Morricone and James MacMillan.To commemorate this historical occasion, Universal Edition has released a new edition of Pärt's Vater unser including a CD recording of the composer performing the work together with the boy soprano Heldur Harry Polda, who performed with Pärt at the Vatican.