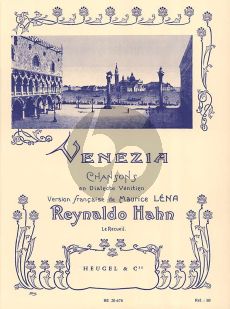 Venezia is a set of six songs of music by Reynaldo Hahn. For Voice and Piano, the lyrics are written both in Venetian dialect and in French. The Piano score requires an upper-intermediate technique, as per the Voice. A small guide to correct pronunciation is given at the beginning of the book. The six songs are: - “Sopra l’acqua indormenzada” by Pietro Pagello - “La Barcheta” by Pietro Buratti - “L’avertimento” by Pietro Buratti - “La Biondina in Gondoleta” by Antonio Lamberti - “Che peca !” by Francesco Dall’ Ongaro - “La Primavera” by Alvise Cigogna Some of these pieces are dedicated to renowned women such as Giorgio Sand, the Countess of Guerne born Ségur and Ernesta Sterne. Reynaldo Hahn was a naturalised French composer, conductor, theatre director and singer. Best known as a composer of songs, he also wrote many pieces and melodies for different instruments.