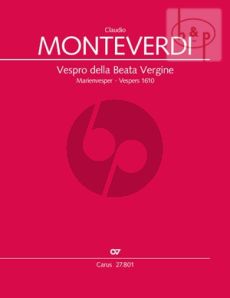 As with scarcely any other work of the 17th century, Monteverdi’s Vespers has found its way into today’s repertoire. Nevertheless, the Vespers still leaves open many questions. The edition, with its critical examination of the sources, takes up these oft-discussed issues concerning scoring possibilities, performance practice, transpositions and liturgical unity. Performance material is organized in a flexible manner to allow for the use of different instruments in those movements without obbligato instruments in order to reinforce the vocal parts and thus invites an individual musical approach to the challenge presented by Monteverdi’s Vespers.

Flexible use of performance material

The editor Uwe Wolf is a specialist for notational practice of the early 17th century has a broad editorial experience. He has published a number of articles and studies on the Vespers and has held seminars on the work at various universities. And he brings his practical experience to the edition as a cornettist (Zink player) through numerous performances of the Vespers both in Germany and abroad.