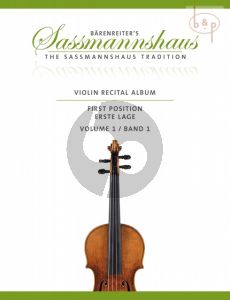 These two collections give young students and teachers a rich selection of recital pieces, either to complement the Sassmannshaus 'Early Start on the Violin' method or to play independently from it. As all the pieces are written entirely in first position, they can be used after just a few months of lessons. The piano part may be played by the teacher or an advanced student. As an alternative, the accompaniment can be played by a second violin. All the pieces are available in exemplary recordings on YouTube. From the contents of Volumes 1 and 2: Nursery rhymes, folksongs but also less well-known gems, as well as original pieces by the editors, all precisely tailored to meet the needs of young students. New recital pieces for the tried and trusted Sassmannshaus violin method All pieces written in first position With a second violin part for duet performance Available in freely accessible recordings on YouTube Kurt Sassmannshaus, the editor of a great many string editions in the Bärenreiter catalogue, continues the tradition founded by his father Egon Sassmannshaus in the 'Early Start' string methods. He developed these two new editions together with his wife Melissa Lusk and his son Christoph Sassmannshaus.