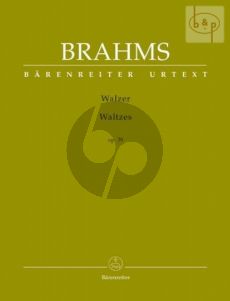 A year after their composition in 1866, Brahms's popular 16 Waltzes op. 39 for piano duet were arranged by the composer for piano solo, thus fulfilling the request of his publisher for a simplified version. Brahms himself described the first version as suitable for reasonable hands, that is for proficient players, and the easier version as perhaps for prettier hands, that is, for domestic music-making. He initially described the latter version to his publisher as a children's edition. The catchy and musically easily accessible pieces are among the composer's most popular works and are particularly suitable for piano students and lovers of the Romantic repertoire. Both versions of the Waltzes op. 39 are available in separate editions and form an important contribution to Bärenreiter's series of Brahms's works in scholarly-critical Urtext editions. Both editions include fingering, a well-presented musical layout and optimum page-turns. The Urtext editions are complemented by explanations on performance practice used by Brahms, an informative foreword on the genesis, sources and significance of the works together with comments on the primary sources. A key work in the Romantic piano repertoire. All known sources and the latest research findings taken into account - Well-presented musical layout with optimum page-turns - Includes fingering - Suggestions on performance practice and interpretation (Ger/Eng) - Informative foreword (Ger/Eng) and critical commentary (Eng) The editor Christian Köhn has been awarded several scholarships as well as winning major international music competitions in Germany. He has released 24 CDs to date, including the first ever complete recording of the piano duo works of Johannes Brahms. Christian Köhn is a lecturer at the Musikhochschule Detmold.