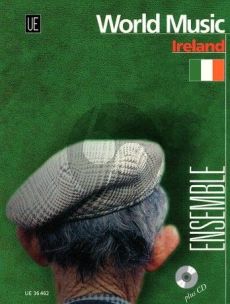 World Music Ireland for ensemble gives young musicians the opportunity to familiarize themselves with music culture from Ireland.

Hardly can a country Iook back on such a rich and continuous music tradition as Eire (as Ireland is called in Gaelic, which, aside from English, is still spoken by a large part of the population). Even though a large part of the music, as we know today, dates back to the 17th and 18th century, many melodies can be traced back to a far older origin. At the same time, there are common roots with Scotland, England and Wales which, today, are often grouped into the general category of Celtic and Gaelic music.

A selection of pieces of fascinating and, at the same time, important styles of music from Ireland should further intensify the already present interest. Rhythms, styles, and instruments typical of a certain country are explained in short texts in English, French and German. The pieces are intended for modern ensemble instruction, in flexible instrumentation, and, thus, can be employed in a variety of ways. Aside from a play-along version, the CD also contains an ensemble version with instruments typical of the respective style of music.

The parts are included on the CD as digital files to enable an easier and more flexible usage.