You Raise Me Up for Piano/Vocal/Guitar - Rolf Lovland 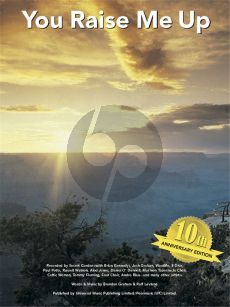 You Raise Me Up, written by Secret Garden’s Rolf Løvland and Irish novelist Brendan Graham, achieved its unique success mainly through being recorded by so many artists around 150 of them todate.

Originally intended as an instrumental entitled ‘Silent Story’ Løvland’s melody only acquired lyrics after the Norwegian composer invited Graham — whose novels he knew — to turn it into a song for Secret Garden’s2002album Once In A Red Moon. It was sung on the album by Irish vocalist Brian Kennedy and although it enjoyed some success in both Ireland and Norway, the song’s eventual path to legendary status only began when JoshGrobantook it to the number one spot on Billboard’s Adult Contemporary Chart in 2004. Groban performed the song at several high-profile events in the US (including Super Bowl XXXVIII, Oprah Winfrey's 50th birthday celebration, andonThe Ellen DeGeneres Show where he was accompanied by the African Children's Choir).

Westlife raised the song’s profile further when they made it the debut single from their album, Face To Face. It was to becomeanall-purpose inspirational anthem featured at everything from the 2009 Nobel Peace Prize concert to series 4 of The X-Factor in the UK. Daniel O’Donnell, Aled Jones, Katherine Jenkins, Il Divo, Russell Watson and TheMormonTabernacle Choir have now all performed it, helping to turn Løvland and Graham’s uplifting song into a global phenomenon and a 21st century classic.