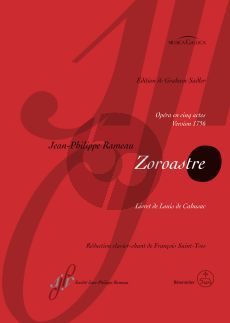 Richer than ever – Rameau’s “Zoroastre” in the version of 1756

Rameau’s revised version of his opera “Zoroastre”, which could be heard and seen between 20 January 1756 and 26 March 1757 at the Académie royale de musique, was favourably received. Also from today’s point of view the work profits dramaturgically from many of the changes and seems altogether richer and more tightly woven than the original of 1749. The subject matter of the libretto, derived from Ancient Persian sources, is timeless: the struggle between good and bad. The good is embodied by the religious reformer Zoroastre, a representative of the supreme light being Orosmade. He is opposed by the ambitious magician Abramane who serves Ariman, the spirit of the dark.

The opera includes some of Rameau’s most ecstatic and spiritual musical numbers, such as the episode of sun worship in Act 3 with the sublime „Hymne à la Lumière“, which, for unknown reasons, was not integrated in the revision of 1756. It is therefore included in Appendix 3 of this Bärenreiter edition. Incidentally, with “Zoroastre” the prologue, which had been customary since the beginnings of French opera in the 1670s, was abandoned. Instead Rameau was the first to introduce an overture which set the scene for the entire drama and thereby anticipated Gluck’s opera reform by many years.

- One of Rameau’s main works for the stage, now available with all its versions
- With an easy to work with piano reduction by François Saint-Yves